League of the Desert

Playoffs: Lost to Liberty in the Southern Region Class 5A semifinals

Break down: Gerber said the Aggies have as much talent as any team he’s had in 28 years as coach. The only question is what to do with it.

He said Juice Washington, who is used as a running back and receiver, was one of the key players who took a leadership role and everyone on the team also looks up to wide receiver David Washington. Maddux Larsen was a backup last season but has emerged as a leader on the offensive line at guard.

Linebacker Christian Thatcher is back in the middle linebacker after a freshman season with 99 tackles. Zurich Ashford set the standard for the defensive line, said Gerber. Tanner Aitken and Kade DeSantis, who probably would have been a starter last year but tore an ACL, lead the runners-up.

Playoffs: Defeated McQueen in the 5A State Championship Game

Break down: The Gaels won the state championship last season and may be ready for more this year. Bishop Gorman has 11 seniors and many underclassmen with at least one Division I scholarship offer.

Quarterback Micah Alejado threw for 2,699 yards and 31 touchdowns and just two interceptions as a sophomore, and he’ll have one of the nation’s most dynamic playmakers at his disposal in Zachariah Branch (48 catches, 1,094 yards, 14 TDs received), along with a three-man running back -Rotation by Will Stallings, Micah Kaapana and DeVon Rice. Zak Yamauchi leads a deep and talented group on the offensive line.

Aiden McComber is back on the defensive line after a 17-sack season, and Jamih Otis (102 tackles, seven sacks) and Palaie Faoa (84 tackles) are game-changers at linebacker. Georgia signer Justyn Rhett is back at cornerback and he’s surrounded by veteran players like Jeremiah Hughes, Elijah Palmer and Kodi Decambra.

Break down: Burts moves over from Valley and inherits a team he describes as student-oriented.

Darrell Finks will likely be the Pioneers’ best playmaker as a running back and wide receiver, and he will also lead secondary as a cornerback. Linebacker Ezekiel Lakes is expected to lead the defense.

Adrian Trejo will anchor the offensive line from his central position and is one of many sophomores who Burts expects will be the core of the program for this season and the next two years. Burts said Canyon Springs’ greatest strength is the way the defense gets to the ball.

Playoffs: Lost to Bishop Gorman in 5A Southern Region semifinals

Break down: Foothill lost 36 seniors, but Brown isn’t calling it a rebuild year.

The Falcons have two returning wide receivers and defensive backs in Ternillia Thomas and Nathan Anderson, while Lawrence Houston is a strong force on both lines. Mason Heizelbetz will also be a key offensive line in the center.

Tarrell Mack-Lovely, who joined from Valley, should help as wide receiver and defensive back, while Mason Dew will take over as starting quarterback. Blake Sharp and Jaxson Burgess should stand out in the linebacking corps.

Playoffs: Lost to Liberty in 5A Southern Region Quarterfinals

Break down: The Longhorns will be young, having brought back just three starters and about 10 who received playing time last season.

Monticelli said youth isn’t always a bad thing and expects Legacy will have plenty of players who can run on the outside.

Wide receiver and free safety Micah McGirt is back as a two-way starter, while Emeka Nsofor will occupy the middle linebacker spot. Darren Bowen will also help as a running back and cornerback. Monticelli reckons it will take time for his team to adjust to playing at varsity pace, but hopes the Longhorns make their move midseason.

Break down: The Panthers have about 40 players who received game time last season and 13 returning starters.

Blair Thayer, who Aznarez described as a throwback, will be the primary ball carrier, although fullback and middle linebacker Donovan Bell will also get his chances with the ball. Tight end Jake Fields is a Division I guy, Aznarez said, and he likes how second quarterback Crew Daniels has taken the reins of offense.

The Panthers have moved away from double wing and more of a pistol look, but they still plan to run the ball. Having four of their five starters back on offense should help.

Break down: The Bulldogs expect to be more competitive than last season, but nowhere near as far as 2019 when they played for a state championship, Forshee said.

Centennial will have about 30 experienced returns and seven starters on either side of the ball. Forshee expects defense to be the Bulldogs’ forte, particularly the Front Seven, who he said could be the best in the Valley outside of Bishop Gorman and Liberty.

Playoffs: Lost to Arbor View in 5A Southern Region Quarterfinals

Break down: The Jaguars could easily have won all but one of the games they lost last season, so they’ve stressed that they’re finishing this season.

Desert Pines has nine returning starters on defense and six on offense, so it’s an experienced bunch. As usual, the Jaguars have some players with next-level talent. Defensive end Idgerrin Dean and linebacker Malik Stinnett are fantastic players who will lead the defense, Rodriguez said.

Playoffs: Lost to Bishop Gorman in 5A Southern Region Quarterfinals

Break down: It’s former UNLV coach Sanford’s second full season with the Crusaders, and he said he’s pleased with how the program’s culture is shaping up.

Quarterback Rylan Walter is back after throwing for 1,249 yards with five touchdowns and 11 interceptions as a junior. He will be joined by running backs Cale Breslin and Vicentico Pringle and four returning offensive linemen led by Dixon Ryan and center Tobyas Spotted Eagle.

Ryan will also help out on the defensive line along with Michael Perry, while cornerback Nehemiah Brooks is the Crusaders’ top returnee in the secondary. Sanford expects special teams to be a strength, particularly kicker and punter Caden Chittenden, who was 5-for-5 on his field goal attempts and threw two from 52 yards during last weekend’s scrimmage.

Playoffs: Lost to Foothill in 5A Southern Region Quarterfinals

Break down: The new coach Mauro is moving up from defensive coordinator and has around 25 returnees.

Mauro spent a lot of time developing a leadership council, and that group will include wide receiver Freddy Rodriguez, linebacker Nate Richter, quarterback Jack Thow, and running back and linebacker Tyler Eenhuis.

Defense represents the Gators’ strength, especially early in the season as continuity has been boosted by Mauro and has more experience that side of the ball.

Playoffs: Lost to Bishop Gorman in the Southern Region 5A Championship match

Break down: The Patriots will have seven or eight offensive starters, depending on personnel group, but only four defensive starters returning, Muraco said.

Muraco said only five or six of Liberty’s starters will be seniors, with the vast majority being juniors. The offensive line will be big and experienced, with four of the five starters returning and blocking for the team’s leading rusher from last season, Isaiah Lauofo. Wide receivers Landon Bell and Ethan Hilliard will be the Patriots’ best receivers.

Muraco expects the defense’s strengths to be their linebackers, with Kahekili Paaoao back as the defensive captain. Green Valley transfers Sonny Vitale and Jae Beasley will also help out in the linebacking corps. The secondary lost four of their five starters. 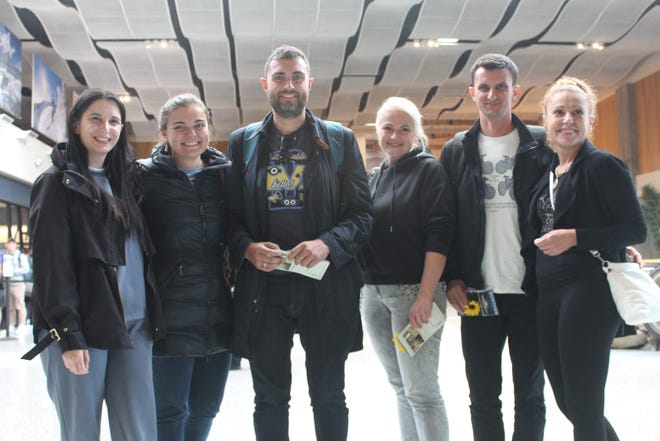 Great Falls is far from the headquarters of international diplomacy. It’s fair to say that …